How to Become a Cruise Ship Musician -Careers in Music
Start Here:

Cruise Ship Musicians perform a wide variety of music to entertain guests on board a cruise ship. How To Become a Cruise Ship Musician

Of this experience, he says, “Most days, I’d wake up around 8 am-10 am (depending on how late we played the previous night) and head upstairs to the main buffet for breakfast. As featured musicians, we had free roam of the ship, including the guest buffet, so the food was always fantastic.

“If we were in a port I liked, I’d go into town for the day and either go shopping or grab lunch with friends, before finding some wi-fi so I could talk to my girlfriend and family. I’d head back to the ship about an hour before departure (I always played it safe; they will leave you behind), eat dinner at the buffet, and get ready for work.

“I’d change into dress clothes (or a tux on formal night) and take the 13-floor elevator trip up to the club. There, my band and I would play three or four hour-long sets, ending around 1:30 am or 2 am (or earlier, if the club emptied out before then). Then, I’d either head to the crew bar to catch up with friends or straight to bed, depending on the night.”

(If you’re interested in earning a living as a musician, check out our blog post on the subject. We touch on working as a Cruise Ship Musician and point out several other musical career opportunities you might not have thought of.)

Cruise Ship Musicians are salaried employees. DiMarzo explains further: “You received a bi-weekly paycheck in cash, minus any purchases you made over the past pay period using your employee ‘debit’ card.”

As fun, as it sounds, in some ways working as a Cruise Ship Musician, can be demanding. “We played every single night, aside from one day off per cruise,” DiMarzo says.

“Cruises varied in length so sometimes it’d be one day off per week, other times we’d go three weeks without a day off because of how the dates worked out. Once a week, we’d also have an additional show in one of the lounges downstairs, where we’d play ballroom dance music and jazz before heading upstairs for our main show. We occasionally did major shows in the theatre and played out on the pool deck for the Halloween party.

“We also had additional non-musician duties. Every crew member has to participate in lifeboat safety drills, and as entertainers, we were chosen to guide and manage the guests during these drills. Each time the ship departed for a new cruise, we’d gather the guests outside (each of us handling about 100 guests at a time) and detail the evacuation procedure — a lot like the Flight Attendant’s speech before a plane takes off.”

“You were either hired for the type of gig you do or you weren’t, and got whatever rate you negotiated with the agent. Some gigs were better than others, though; the solo performers (the “piano man” and the folk guitar singer in the pub) always made twice what we did, and had better accommodations.”

If a Cruise Ship Musician is interested in growing his or her career with the cruise line he or she can apply for a position as the ship’s Musical Director after gaining a certain amount of experience. However, this is not a performing role, but rather a management one.

Openings for cruise ship musicians are posted on the websites of the various cruise lines. Interested musicians can also check with musician recruitment agencies such as Lime Entertainment or another reputable agency. Applicants must pass an audition before being hired, so it’s important to be a highly-trained musician.

As can be expected, performance skills and musical knowledge are paramount for Cruise Ships Musicians. People skills are integral, too, as you’ll be interacting with crew and talent from around the world, and serving as the public face of the cruise line among guests.

DiMarzo suggests aspiring Cruise Ship Musicians “be absolutely fluent in every genre of music you can imagine. Our sets usually included some ‘70s disco and soul, ‘80s pop, ‘90s R&B and hip-hop, and whatever Top 40 pop songs had recently come out on the radio. On a couple occasions, I even stepped in to cover the bass part for the big band jazz show when their bassist was out sick.

“At the auditions, the Bandleader threw a little bit of all of that at me, and because I was able to cover all those bases, I got the gig. You also need to be a strong listener, able to catch on to and follow what the musicians around you are doing, as well as a strong reader. One or the other won’t cut it.”

Living in close quarters with strangers and playing gigs nearly every night definitely requires a certain type of personality. So who would make a successful Cruise Ship Musician? “Someone who is comfortable being independent, but quick to make friends,” DiMarzo suggests.

“I was lucky my whole band was hired together so I was going on the ship with my friends. That said, most of the gigs are solo contracts – you’re hired alone and are assigned a complete stranger as a roommate, likely from another country, who might not even speak the same language as you. You need to be ready to adjust to new environments, new social situations, and new people quickly and comfortably.”

Do you just want to work in the Music Business?

A formal education is not a prerequisite for applying to become a Cruise Ship Musician, although extensive musical study is.

DiMarzo puts it this way: “I have a four-year Music Performance degree (which I’m very glad I got), but no Bandleader has ever asked about my education. All that matters is that you play well and are ready for any situation. Taking private lessons is great, but putting in the practice and getting experience in real performance environments are 90% of the equation.

“Practice as much as you can (I did about four hours a day between the ages of fourteen and twenty), and get as much performance experience as you can. Open mics, playing for friends at parties — whatever it takes to kill your stage fright and teach you how to handle the things that go wrong on a gig.”

Do you play an instrument?

“Because we’re from all over the world, and only ever on the same ship for a few months at a time, there’s not much in the way of organization between us,” says DiMarzo when asked about networking groups, professional associations, and unions.

He adds, “We keep in touch through Facebook, but there aren’t any unions or anything. If you’re looking for a job, the best way is to check the Careers section on the cruise line you’re looking to work for.”

“Practice like crazy and then go for it. If you can read, play in front of an audience, and cover any genre they throw at you, you’ll make it.”

“It’s very easy to spend your entire paycheck before you even get it. That ID card is too easy to swipe at the crew bar, or at the restaurants onboard, or in the gift shop.

“I’m not saying to be a total penny-pincher onboard – you’re traveling the world, you should definitely eat out at some awesome restaurants and pick up some cool souvenirs – but cruise ship work is such a fantastic savings opportunity. You have the chance to live rent-free, with an all-you-can-eat buffet for every meal, every day. There’s no better time to build up a huge savings than when you have literally no expenses.

“The #2 mistake was not using the free gym onboard the ship. I made this mistake a lot.”

“‘What did the crew do in the places you visited?’

“The answer might surprise you. We could land in the most beautiful tropical paradise, and chances are you’d find us all huddled around a Starbucks on our phones checking Facebook. Wi-fi is the cruise ship employee’s number one priority, anywhere they go.

“If you’re ever in a town that acts as a cruise ship port – San Juan, Puerto Rico, Port Canaveral, Florida, Portland, Maine, to name a few – and your favorite coffee shop is too crowded with folks on their phones and laptops to get in the door, I apologize on behalf of the cruise ship employees.”

“‘Why did you leave the cruise ship business?’

“Since the cruise ship, I’ve gotten married and bought a house. The cruise ship lifestyle very strongly favors the untethered, single person. I’m close with my family, and while my (then) girlfriend tolerated my lengthy disappearances to the Caribbean a few years ago, neither of us could stand the thought of going so long without seeing each other.

“It’s an amazing career, especially for someone right out of college (the ship is like a big, floating, international dorm), but the lifestyle has to fit you.”

“Ready. Ready to play the songs the bandleader told you to learn and ready to play the new song the main act just decided they were going to add five minutes ago. Ready to step in when the bass player is sick. Ready to entertain and delight passengers when they recognize you in the dining hall, even though it’s 8 am and you just wanted some coffee. Ready for anything.” 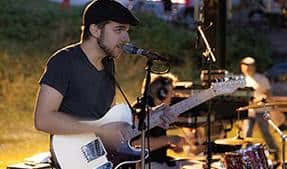 Dean DiMarzo is a professional musician and Private Instrument Teacher in the Hudson Valley area of New York state. While DiMarzo was a Guitarist with Royal Caribbean Cruises, he traveled to Bermuda, the Caribbean, and Nova Scotia, performing with the band Bosco and the Storm. You can read more about DiMarzo’s stint as a Cruise Ship Musician via Travel Pulse.