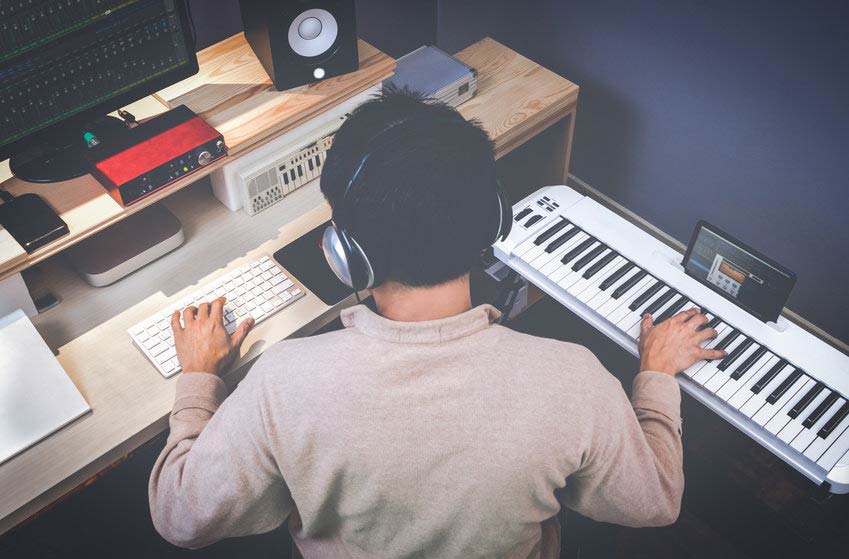 With the rise of original TV and film programming for Hulu, Amazon, and Netflix, there’s more entertainment out there than ever before.

In fact, it can be hard to keep track of new shows, not to mention keeping up with all your existing favorites. This might be bad news for your social life, but if you’ve ever wanted to hear your original music featured on the big or small screens, it’s amazing news.

We’ve talked before on the blog about licensing your band’s music through relationships with Licensing Representatives, TV/Film Producers, and Music Supervisors, but in this story we’ll be discussing how to license or sell your original compositions to a production music library.

As a Production Writer, at the top of your game, you can make anywhere from five to six figures by teaming up with a library that will place your music in TV shows, films, and commercials. If they’re successful, you’ll split your earnings with the production music library — and you’ll continue to make money as the royalties roll in, even years after the project first airs.

So how does the whole thing work? Erik Jacobsen, Production Music Writer and Founder of Syncfree Music, describes the process of selling music from his library to TV shows by saying, “I send out a request from the Producers of every show we’re working on and give them [the Production Music Writers] specific details and links to songs of what they should sound like or a folder of songs chosen before by the same Producer. Once I get music from them I’ll give feedback, if necessary. I like to help them get as many placements as possible.”

TV Production Music Writers are highly skilled musicians with a lot of experience.

Jacobsen says, “I’ve been writing since I can remember. I composed for different big bands in high school. I started as a player and still am. I started writing lyrics in high school and went to the University of Miami for Jazz Studies and William Paterson for my jazz degree. I ran a music studio out of my house and did freelance producing for different singers in New York and after doing some production work I made a nice connection with a Producer who needed tracks for television.

It was As the World Turns, All My Children — soap operas were big time. I started writing for those around 1993 and that launched my love of writing for television. In the early 2000s I started the company. I knew so many people who were great musicians and everyone had their own studios. I also put ads out there looking for different writers on the website for ASCAP. I found a bunch of writers and now we have writers from all over the planet who send music.

Munson describes his first experience writing production music by saying, “About 10 years ago an acquaintance of mine had a contact with a production company that was producing a lot of shows for Scripps Networks. At the time I did not know that Scripps generally does not pay performance royalties.

Fortunately, we (my wife Robin and I) were paid up front and ended up getting our copyright back so we could place those tracks elsewhere. Even though I’ve been in some form of the music business for many years ‘direct licensing’ was a new one to me!”

“Be committed and dedicated. Learn your instrument well, but try other instruments for fun. Learn how to network. [It’s] not always possible but if you can, move to a major city like LA. Networking will get you there as fast as anything, as long as you have decent tracks.” – Art Munson

But you still need to be passionate about learning and growing your career.

They need to listen to everybody, all styles, and all the greats, as far back as they can go so they know where things come from. So when you get a request for something you’ll know where it’s coming from. They must have a good ear for all styles. They should really know the difference between Celtic music and bluegrass, for example. They should be able to produce like they’re making an album. When I started, I had an eight-track reel-to-reel and it sounded ok but it’s not like the digital realm we’re in now. The competition is fierce, so you must have the mindset that you’re producing and making a record.

If you say ‘this is good enough for television, for some reality show,’ that is not the way to approach it.

They should know their strengths and weaknesses and capitalize on their strengths. If you’re great at guitar, just be the best rock Producer you can be.”

Munson advises, “Pay attention to the music on TV and advertising. Listen to the music in the top libraries. If you can get a formal music education, do so. Be committed and dedicated. Learn your instrument well, but try other instruments for fun. Learn how to network.

[It’s] not always possible but if you can, move to a major city like LA. Networking will get you there as fast as anything, as long as you have decent tracks. ‘Decent’ is in the ear of the beholder, though. Be patient and persistent!”

You can make a lot of money.

In regards to how much a skilled Production Music Writer can make, Munson says, “The sky’s the limit, really. [It] depends on how your career evolves, but certainly [you can earn anywhere from the] mid five to low six figures.” Jacobsen agrees. “I know a lot of Composers in my library will make six figures, but their music is in other libraries and they’re not the norm,” he says. “They’re fabulous. They can make any kind of music and it sounds professional.”

For those just starting out, Jacobsen has some advice. He says, “First of all, they need to understand how the PROs [performing rights organizations] work and how they pay off their royalties. When they get a statement, say they got a song on an MTV show, they can make anywhere from a hundredth of a cent to thousands of dollars. (Network pays more than cable. There are also other times that pay more — like primetime television pays more than late night cable. ASCAP, BMI and SESAC have great websites where you can read about this.

In reality I’d think the real life average of cable television is always somewhere between a quarter and a dollar every time your song is played, and the more it’s played the more it’ll get recognized by ASCAP. Cable is really a game of placement numbers.

The more libraries you’re in, the more placements you can get — especially if you’re not getting any fees up front. If you write for certain programs, you will get a fee for that song. A lot of libraries — they all work differently — will share fees with you, others won’t.

There are a lot of deals out there that are all structured differently. If you’re a Staff Composer with a library, usually those libraries have an exclusive lock on a show so they’re writing exclusively for whatever show — the Kardashians or Bad Girls Club. So anything you write as a Composer for the library is going to get on the show.

An added tip from Jacobsen: “For non-exclusive Writers, yes, do as many libraries as possible.”

“The competition is fierce, so you must have the mindset that you’re producing and making a record. If you say ‘this is good enough for television, for some reality show,’ that is not the way to approach it.” – Erik Jacobsen

But it’s not a career for those seeking recognition.

Jacobsen says, “I tell young musicians this all the time. For people who are in bands, to me, the average music library is not really a good fit for a band. I’ll give you my reasons why I try to steer them away from my library. Generally speaking, if you’re in a band you’re selling the sound you have, your six or seven songs you’re trying to shop around.

Once you join a library, even if it’s not exclusive, the sound of those songs will be part of a music library. What I mean is a library will generally retitle your songs. They’ll do a television theme song with one of your songs and people will know that song. If you get a deal for that song with a label, you’re going to have a conflict.

A label will want exclusivity and you gave it to somebody else with a non-exclusive library. I know some libraries won’t tell people that and take advantage of that; you can’t get out of the contract and you’re stuck.

Music libraries are designed for people who sit behind their computers and churn out tracks one after another. They’re not tied to their tracks emotionally. These are their little soldiers and they go out and send them to this different library, this library, and this other library and just want to exploit their copyright.”

There are certain things you can do to make your music stand out.

Obviously writing music for licensing to TV is a totally different ballgame than writing music for your band, for an opera, or for a film score. In Part 2 of this story, we’ll share advice from Munson and Jacobsen on how to make your tracks stand out, how to present your work like a skilled professional, and how to tailor your work to be what Music Supervisors need.